At present in Ukraine there is a large supply of antifreeze fluids recommended by the manufacturer for use in heating systems.

Let us see how applicable these antifreeze fluids are in heating systems from theoretical and practical sides.

The use of coolants is regulated by GOST 28084-89 "Low-freezing cooling liquids. General technical conditions "- it normalizes the key indicators of coolants based on ethylene glycol (concentrate, OJ-40, OJ-65): appearance, density, temperature of crystallization, corrosive attack on metals, foaming, rubber swelling, etc. GOST does not specify the composition and concentration of additives, as well as the miscibility of liquids. This, as well as the color of the coolant, is chosen by the manufacturer. Production of coolant by the manufacturer is based on self-developed specifications.

Regulatory documentation on propylene-containing and saline fluids was not found.

Normative documents regulating the conditions of life test do not exist. Tests under full load of the heat generators are expensive (250,000 - 500,000 USD) and long-lasting (6-12 months), that is why they are almost never held. The high cost of testing consists of the cost of a heat generator, a test bed, consumed gas and the system water for cooling the heat exchanger, as well as the removal of waste water. After testing the heat generator and the system elements are exposed to destructive analysis and are not suitable for further use.

SNIP 2.04.05-91 "Heating, Ventilation and Air Conditioning" regulates the use of additives in the heating systems in the following way:

3.3. For heating systems water should be used as a coolant, other heat carriers may be used in the techno-economic justification. For buildings with periodically operating heating systems water with additives may be used to prevent it from freezing. The additives should not be explosive and flammable substances and substances of 1, 2 and 3 of the hazard classes in accordance with GOST 12.1.005-88 in amounts which during an accident may cause discharge with concentrations exceeding the lower flammability limits (NKPRP ) and MAC in the air of the room.

Based on the foregoing, we conclude that the regulatory framework governing the use of freezing liquids is very vague and lacks specificity. The use of them in the boiler rooms is also not regulated.

Now let us look at the thermal properties of heat carriers - water and antifreeze based on ethylene glycol, propylene glycol and saline.

As can be seen from the table above, the thermophysical properties of antifreeze are remarkably different from those of water.

Glycol-based antifreeze is very critical for the extreme mode of heating systems, for example for overheating. If the water temperature of the system at any point exceeds the critical value of this brand of antifreeze - the thermal decomposition of glycol and anticorrosion additives will occur, which forms acids and solid precipitation. If precipitation occurs on the boiler heating elements, "snuff" is formed, which leads to poor heat transfer on the part of heating element, to the formation of new presipitation and to further overheating of these parts. 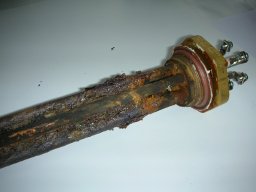 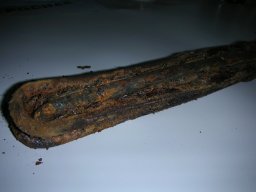 An example of what happens to the heater of the electric boiler, which had operated during half the heating season with antifreeze in the system, is in the photo.

Acids formed by thermal decomposition of glycol, begin to interact with the metals of the heating system, causing corrosion. Thermal decomposition of additives can lead to loss of the protective properties of antifreeze to the sealing materials - rubber, paronite etc. and cause leaks in the connections. Piping with zinc coating must not be used.

Overheating of the antifreeze also causes its "foaming" - excessive foam formation, which leads to airing of the system.

Antifreeze have the property of high permeability and fluidity. The more threads, gaskets, seals there are, the greater the likelihood of leaks. The unpleasant feature is that leaks often occur when the heating system is turned off and cooled down. During the cooling off the reduction of volume of the metal compounds and, as a consequence, the appearance of microcracks, through which antifreeze begins to ooze. For this reason, all the connections in the heating system must be available for inspection and repair. In no case can you hide them under the plaster, cladding or monolith.

When designing the boilers, the manufacturer comes from the fact that the heat carrier of the heating system will be water. Based on the thermophysical properties of the fluid the amount of boiler water, the value of the conditional passes of the heat exchanger, the heat exchanger configuration, the pickup value of automation and many other factors are determined.

The manufacturer during in-plant testing and certification (in which water is used as the heat carrier) has a clear idea of the boiler operating parameters, and the relief devices action.

If antifreeze, which thermophysical properties are different from the thermal properties of water, is used as the heat carrier the manufacturer simply does not know how boiler will operate in a given situation, and of course, cannot guarantee the correct operation of the equipment.

Therefore, the use of any liquid other than water as a heat carrier in the heating system, leads to refusal of the manufacturer to provide warranty for the equipment.